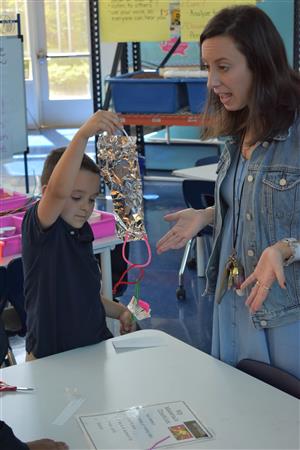 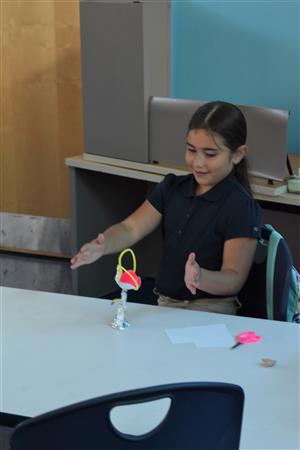 Alyssa Basso is asking for help from the third graders assembled in the library of John S. Martinez Sea and Sky STEM School. Her “fuzzball friends”—little neon-colored pom-poms named Harry, Harozuka, and Harolina—are nosy, and they need a perch from which to observe the goings-on in the class. Can the students help by creating one?

Basso tells the students that engineers are people who solve problems by building things. As engineers, the students can construct a solution to the fuzzballs’ dilemma. First, she asks, what does Harry’s desire to see mean about the height of his perch? A student replies that, the higher up Harry is, the more he will be able to see. “Let’s test that theory by building,” suggests Basso.

The students, who are grouped by table, each receive the same materials: pipe cleaners, 12 inches of masking tape, muffin liners, two pieces of foil, two index cards, and a pair of safety scissors.

“Why pipe cleaner?” Basso asks while bending hers into various shapes. “How will we use it?” The students observe that the pipe cleaner is flexible and holds new shapes.

Basso circulates among the tables to ask students about their ideas of what to build. One student suggests she will build a chair. Another says he will put a chair on top of a tower. Basso responds by putting a classroom chair on top of a table. “I like your ideas about the chair,” she says. “If we look at something in real life, we can decide to make ours the same or to change it.”

The students discuss their ideas, and start building quickly.

A student named Silas uses a pair of pipe cleaners like ropes and a muffin liner to make a seat, fashioning a sort of swing. He proudly places a pom-pom in the seat and holds it up. Basso admires his work, then asks Silas if he can think of a way to modify his design slightly so that it can stand or hang independently. Silas goes back to work.

A student named Nayeli has crafted a large leaflike platform out of aluminum foil and is doing her best to make it stand by taping the stem to a piece of an index card. Her platform keeps toppling, and she is growing frustrated. Basso asks her if there is anything about her creation that may be making it difficult to achieve the goal of standing stably. Nayeli indicates the size of the leaf. “That’s a good observation,” says Basso. “If something is heavier on top, will it stand?” Nayeli begins to add more foil to the stem, creating a wider base.

At last a student named Divanice, who also had been having balance problems with a foil stand, shows off her own solution: a pipe cleaner, folded accordionlike to create a stabilizing extra leg for her platform. A fuzzball friend sits proudly in a muffin liner at the top. Divanice is exultant.

As the students begin cleaning up their materials, Basso asks them how they felt during the design exercise. A number of students reply they had felt frustrated while they struggled with constructions that would not remain upright. “We kept trying and it wasn’t working,” one student says, “but the trick is to never give up.”

The exercise Basso has conducted with the third graders will be repeated this month with groups from kindergarten through eighth grade. Older students will exercise more sophisticated STEM skills, such as measuring lengths of tape and the height of the perches they create. Basso initiates monthly STEM challenges, which build over the year as they incorporate science learning standards, in accordance with Martinez’ STEM theme. The purpose of this initial challenge is to introduce the engineering design process, as well as to encourage students to work collaboratively to plan out and test solutions.

“This idea of never giving up and of always having a growth mindset, I want it to transfer into everything they do,” Basso says. “I’m also really passionate about the art of discourse: Together, we are working on the same problem, and we know we all play an integral role in solving it.”