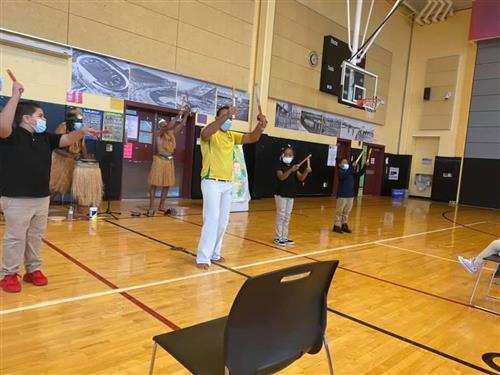 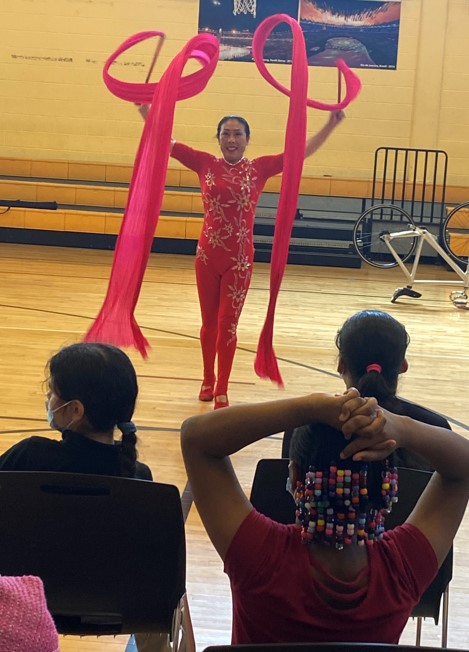 Roberto Clemente Leadership Academy is a HOT school. That designation comes not from an affinity survey but from the fact that it employs “higher order thinking” programming embedding the arts deeply into its curriculum.

A recent schoolwide performance featured capoeira, a Brazilian form of martial arts that resembles dance and is performed to percussive music. The tradition initiated among enslaved people brought to Brazil from western Africa and evolved as a form of self-defense that was disguised as dance. Clemente students both witnessed the martial arts performance and participated in the music making.

The capoeira demonstration provided an opportunity for classroom work on map skills and promoted student awareness of Afro-Brazilian culture, according to Clemente’s climate and culture specialist, Stephanie Pacelli. These lessons integrated with Clemente’s global awareness curriculum, which asks the question: What makes countries unique and different?

The HOT schools program is designed to enrich school culture, expand teacher practice, and improve student engagement. Initially developed by the Connecticut Office of the Arts, the program is now advanced through Arts for Learning Connecticut, an organization dedicated to expanding learning through the arts.

As part of its programming, Arts for Learning maintains a roster of artist-educators that includes such groups as the Afro-Brazilian Ensemble, which led the capoeira demonstration at Clemente. “They help us to find artists that support curriculum that we have created,” said Pacelli. “Then the artists come in and support our students while teaching them about poetry, rap, or dance.”

Artists who have worked with students at Clemente include Aaron Jefferis, a poet and playwright, whose hip-hop musicals such as Shakespeare: The Remix and No Lie have won awards from the American Academy of Arts and Letters, Sundance, and others. Multimedia artist Gerald Moore introduced students to an activity he calls “The Game,” which utilizes plexiglass blocks in an architectural configuration to create a framework for storytelling.

Arts for Learning also works with teachers to suggest curricular approaches to the subject matter and to implement programming in the classroom. In the fall, Clemente grades two and three participated in an “integrated residency” that lasted 10 days and featured two teaching artists, Anthony DePoto and L’Ana Burton, who worked with teachers to design a unit that combined the English Language Arts curriculum and theater. “Through movement, acting and creative dialogue, students gained an understanding of the different components that create a good story,” according to Pacelli. “They became familiar with the elements of dance along with theater tools which helped them to enhance their story-telling skills.” The students worked as an ensemble and performed a play.

The next schoolwide event will feature Li Liu, an acrobat from China who performs hand balancing, plate spinning, artistic cycling and ribbon dancing. She not only will teach students how to perform some of her dances, she will bring maps to help them understand the geography of China and will touch on various aspects of Chinese language and culture.

Clemente Principal Mia Edmonds Duff points out that performances by artists such as Li Liu and the Afro-Brazilian Ensemble fit well with Clemente’s theme, which includes global awareness. Each classroom is assigned a country whose culture and history they explore over the course of the school year. With a diverse student body, the exploration of world cultures also facilitates discussions around identity and fosters social emotional learning, she said. “To achieve cultural awareness, it is really important that students are able to empathize,” Duff said, “and not only to empathize but also to appreciate each other's differences.”

In addition to the curricular tie-in to world cultures, the program features an emphasis on writing, Duff said. “Sometimes our students are learning to turn their writing into art,” she said, “and sometimes they are having another kind of experience with the artist and writing about it.”