Wilbur Cross Students Learn the Law as They Explore Media 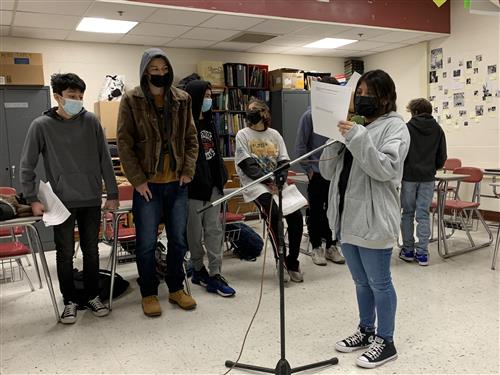 “Oye, oye, oye,” calls Ariel Rodriguez, a junior at Wilbur Cross High School, in a voice loud enough to command the microphone. “Welcome to Mr. Brochin’s Contemporary Law Class. In today’s special session, we will be producing a podcast about immigration law.”

Students file into the classroom from the hallway, where they have been waiting for Ariel’s invitation. One by one, they step up to the microphone and introduce themselves. Then, four students take turns reading stanzas from “The New Colossus” by Emma Lazarus, the poem inscribed on the base of the Statue of Liberty which includes the famous lines “Give me your tired, your poor, your huddled masses yearning to breathe free.”

After the poem, groups of students make presentations about two movies, The Visitor (2008) and El Norte (1983), that offer compelling views of the plight of illegal immigrants to this country. Their teacher, Jim Brochin, encourages them to describe their emotional responses to the films as well as to consider what the characters are experiencing from the standpoint of immigration law.

The Visitor (2008) tells the story of a widowed professor of economics who befriends a pair of illegal immigrants he finds living in his New York apartment. He eventually hires a lawyer for the young man, a Syrian, after he is falsely accused of jumping a subway turnstile, detained, and threatened with deportation. El Norte (1983) features an indigenous pair, a brother and sister, who flee political persecution in Guatemala and face a nightmarish crossing into the United States from Mexico. The sister is nearly caught up in an immigration raid and later dies of typhus owing to rat bites she endured in an abandoned sewer pipe while crossing the border.

The next student group presents legal terminology associated with immigration, including “non-immigration visa,” “naturalization,” “legal permanent resident,” “green card,” and others. The class answers questions about U.S. government and history, much as candidates for naturalization would. They then stand, raise their right hands, and recite together the Oath of Allegiance for U.S. citizenship.

Brochin shows his students films about immigration for the same reason he has them act out the naturalization ceremony: as a way of giving them an emotional stake in the legal process they are studying. “I started with the premise that films are powerful experiences that can stay with you for the rest of your life,” he said. He believes that having an emotional “post hole” enables his students to dive deeper into the substance of the course, as well as to do a better job at writing and speaking about the material. He also chooses movies that accurately depict legal circumstances. “The Visitor is the best asylum story I have ever seen,” he said. Much as he uses The Visitor and El Norte to teach immigration law, he uses My Cousin Vinny to teach courtroom trial procedure and Twelve Angry Men to explore a jury’s role in a murder trial.

Before Covid, Brochin took his law classes every year to witness a naturalization ceremony in federal court. “They really love it,” he said. “They don’t know how much they will love it until they are there.” In those years, he gives his students a simple assignment: “As many new citizens as are still in the building, go ask them politely if you can talk to them.” The resulting interviews often end up in the school newspaper, The Proclamation, and in podcasts about the experience.

Brochin has been making podcasts with his students for years. “A podcast is such a useful teaching tool because it allows students, in essence, to become reporters,” he said. “It also lets them speak in the first person. They can talk about their own experiences of the material and synthesize what they’re seeing, how it makes them feel, and what they believe on the basis of that.”

In the spring, Brochin’s students will study constitutional law. They will learn about drafting briefs and arguing appeals, and they will enact a mock civil trial, with witnesses and evidence.

Brochin, who has taught at Wilbur Cross for 20 years, designed the law course himself, drawing on his own experience as an attorney. He practiced that profession for 15 years. His daughter and son attended Wilbur Cross, and he had been co-president of the school’s PTO. It wasn’t that he disliked law, he said, but rather that he “knew teaching would give me a deeper satisfaction.”